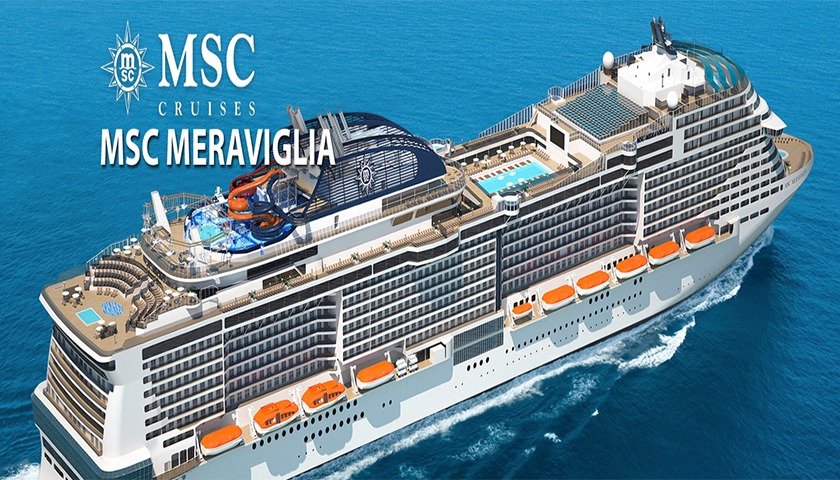 No passado sábado, the latest wonder of MSC Cruises fleet, MSC Meraviglia was inaugurated in an extraordinary ceremony by international legend and godmother of all ships of MSC Cruises, Sophia Loren.

Com 171,598 GRT and with ability to 5,714 passageiros, MSC Meraviglia is the largest ships to be built by a company of European cruises, MSC Cruises, and also the biggest ship to be delivered in 2017.

A MSC Cruzeiros, biggest private cruise company in the world with headquarters in Switzerland and the market leader in Europe, incluindo Portugal, in South America and South Africa, held your glamorous event in Le Havre, with world-class artists entertainment and an exclusive gala dinner, in the company of special guests, authorities, travel industry partners, journalists from all over the world, and the administration of MSC Cruises and top of your parent company, the MSC Group. Gianluigi Aponte, founder and Executive Chairman of the MSC group, as well as the owner of the vessel, were present together with families Point and point-Vacant.

– We have an ambitious vision for the future and the MSC Meraviglia marks the beginning of the second phase of our company's growth,"said Pierfrancesco Vago, Executive Chairman of MSC Cruises, acrescentando que for this reason, This night is a time of extreme pride for all of us at MSC Cruises, When we see the first of our next-generation vessels be presented.

Pierfrancesco Vago also said that the new ships that are purposely built, featuring innovation, in both product as in design, as well as State-of-the-art technology and consumer-focused, in order to create unforgettable vacation experiences for travelers of all ages. Entre 2017 e 2020 the MSC will receive six new ships

– MSC Meraviglia is the first ship to make this vision a reality, a time to establish a new standard for cruise ships as a destination in themselves, added the Executive Chairman of MSC Cruises

MSC Meraviglia is the new company and the 13th ship to join the fleet of MSC Cruises, as well as the first ship of the company to be delivered under the unprecedented investment plan of the company .

Both the ship like the Saturday event were inspired by the wonders of the world, Once Meraviglia means Marvel. The baptism ceremony was hosted by one of the best-known European comedians, Gad Elmaleh. Those present had the opportunity to enjoy a performance of the famous Patrick Bruel, that enthusiastic and gave all those present with a range of their best-known songs. The goodwill ambassadors for UNICEF Kids United also made a performance, representing a different world, promoting peace and tolerance.

The highlight of the evening was the parade of ship's officers, time when Sophia Loren cut tape, breaking a bottle of champagne against the hull, as is tradition, and so by drowning the MSC Meraviglia. Ao mesmo tempo, began a show of fireworks, While in the precincts of the ceremony "it rained" bright confetti.

It is recalled that Sophia Loren maintains a close relationship with MSC Cruises for over a decade, from the moment I became godmother for the first time of the MSC Lirica, em 2003. As the MSC Cruises fleet continued to grow, her "blessed" all new ships, reflecting the belief of MSC Cruises not only on customer loyalty, but also in fashionable style, talent and unique beauty of Sophia Loren. The same elements that distinguish each detail on board MSC Cruises.

In kind of conclusion, a note to the cuisine Hélène Darroze, the chef with 2 Michelin stars that created an exceptional menu for VIP gala dinner, as well as a unique dish for all guests. The menu was inspired by the passion of Chef Daroze in combining the flavors of France with those of the United Kingdom in order to create a simple and elegant gourmet experience for the guests.

MSC Meraviglia will have the ability to scale in most international cruise ports and is slated to become one of the most sought after destinations in the sea.

Some of the features that differentiate the MSC Meraviglia are:

– World-class entertainment of Cirque du Soleil, with two exclusive performances Cirque du Soleil at Sea, created just for the MSC Meraviglia It will consist of two performances for six nights of the week, where passengers can enjoy a unique experience of show & dinner or show & cocktail.

– A greater variety of dining options and bars than in any ship MSC so far, com 12 different locations for dinner and 20 bares.

– Being a family company, the activities and services for children and young people are at the heart of the MSC offers travelers and the family deck area devoted includes a brand new entertainment offerings and State-of-the-art facilities for the whole family.

– MSC for Me, the new digital experience, created so that travelers can make the most of your holiday, by connecting them to the most desirable experiences for you.

– Innovative and comfortable accommodations to meet all of the requirements, which demonstrates how the MSC Cruises focuses the traveler to design the ship, com 10 different types of cabins to choose from, There is, de facto, something for everyone.

The maiden voyage of the MSC Meraviglia began last Sunday from Le Havre to Genoa – through Lisbon on the day 7 June – and their itineraries from Genoa in the day 11 de Junho. MSC Meraviglia will offer six embarkation ports in the Western Mediterranean including popular ports of Genoa, Marseille and Barcelona, as well as magnificent Mediterranean destinations including Naples, Messina, in Sicily and Valletta, em Malta.

ARHESP concerned about restrictions in the country

Lisbon is a good city to buy hotels