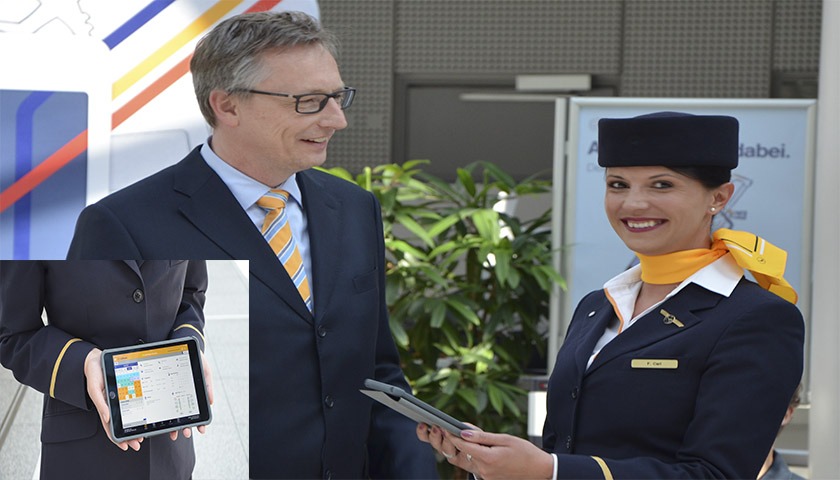 A simple touch of the button and the digital world opens up to you. A finger slides the surface and navigates to a yellow app. In the app “Lufthansa crewFlight”, the seating chart, giving the cabin crew all information about passengers on your next flight.

Lufthansa is providing 20 thousand iPads Minis to your cabin crew. The so-called cabin mobile device (CMD) will be made available to all cabin crew in the coming weeks, and it's part of the process of digitalization of Lufthansa. Another technological device, called Electronic Flight Bag, is already in operation in the cockpit since the beginning of 2015 and is used by 4300 pilots for flight planning and operations. Paralelamente, the heads of the cabin received a tablet. A step which is now being extended to the rest of the team.

The CMD will make the cabin crew members have access to all the data they need to work on board, have access to service manuals or important timelines, that allow you to easily preview the changes in the plans. The technology also announces a new way to work without papers, simplifying existing procedures so that employees have more time to customers, resulting in significant improvements in on-board communication.

The project Cabin Mobile Device is part of a current program of transformation called "OPSession", which aims to scan further the operational areas of the Lufthansa, the Swiss and Austrian Airlines. Employees with no fixed workplace will also receive mobile devices, so they can meet the needs of passengers in a custom way.

Dreaming proposes the end of the year in Madeira