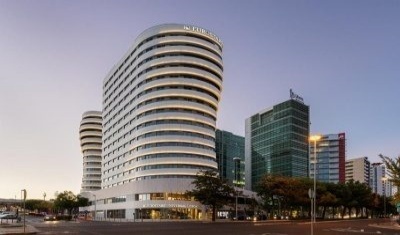 The Eurostars Hotel Company consolidates its commitment to Portugal with the opening of two new hotels in Lisbon, both at Parque das Nações, an investment of more than 55 milhões: or Eurostars Universal Lisboa, a five star hotel, and Ikonik Lisbon, a three-star hotel.

Eurostars Hotel Company, the hotel chain of Grupo Hotusa, continues to advance in the consolidation of its portfolio of hotel projects, namely in Portugal.

It should be noted that these are two hotels, um de 3* and another one from 5*, located in two buildings connected by large rooms designed to host the most diverse events, be they social, family celebrations or MICE meetings.

Assim, there are over 800 m2 of rooms capable of hosting events of up to 1.000 pessoas, perfectly equipped with the latest technology Eurostars Universal Lisbon is a hotel of design, that offers 189 quartos.

Among other facilities, stand out in its structure, with a swimming pool on the roof of the building, a large spa and gym area, a restaurant where you can taste the best of Portuguese cuisine and even 3 parking floors.

As for Ikonik Lisboa, it is a modern and functional hotel., also located in Parque das Nações, oferecendo 230 air-conditioned rooms with a work desk, a safe, a flat-screen TV and a private bathroom with a shower.. It is complemented by a bar and private parking. Wi Fi is free and breakfast is served as a buffet..

In addition, this unit is the first Ikonik hotel in Portugal, a brand that represents a new way of designing hotels, a colorful and innovative anagram that adapts to each person's lifestyle, of every place and every moment.

With these two new openings in Lisbon, the group starts to detain 21 unidades hoteleiras, Portugal being the company's second most important market, right after Spain.

Before these two hotels, now opened, but operating in 'soft opening', the group already had about 1.900 quartos, nos, until here, 19 estabelecimentos.